Kolabtree, in collaboration with an international social science research team (details below), aimed to explore how independent scientists experience their work. The study measures the satisfaction levels, challenges and level of optimism held by scientists about the future of freelancing, while also investigating the role of socio-economic factors.

The key findings from the survey are summarized in the infographic below. 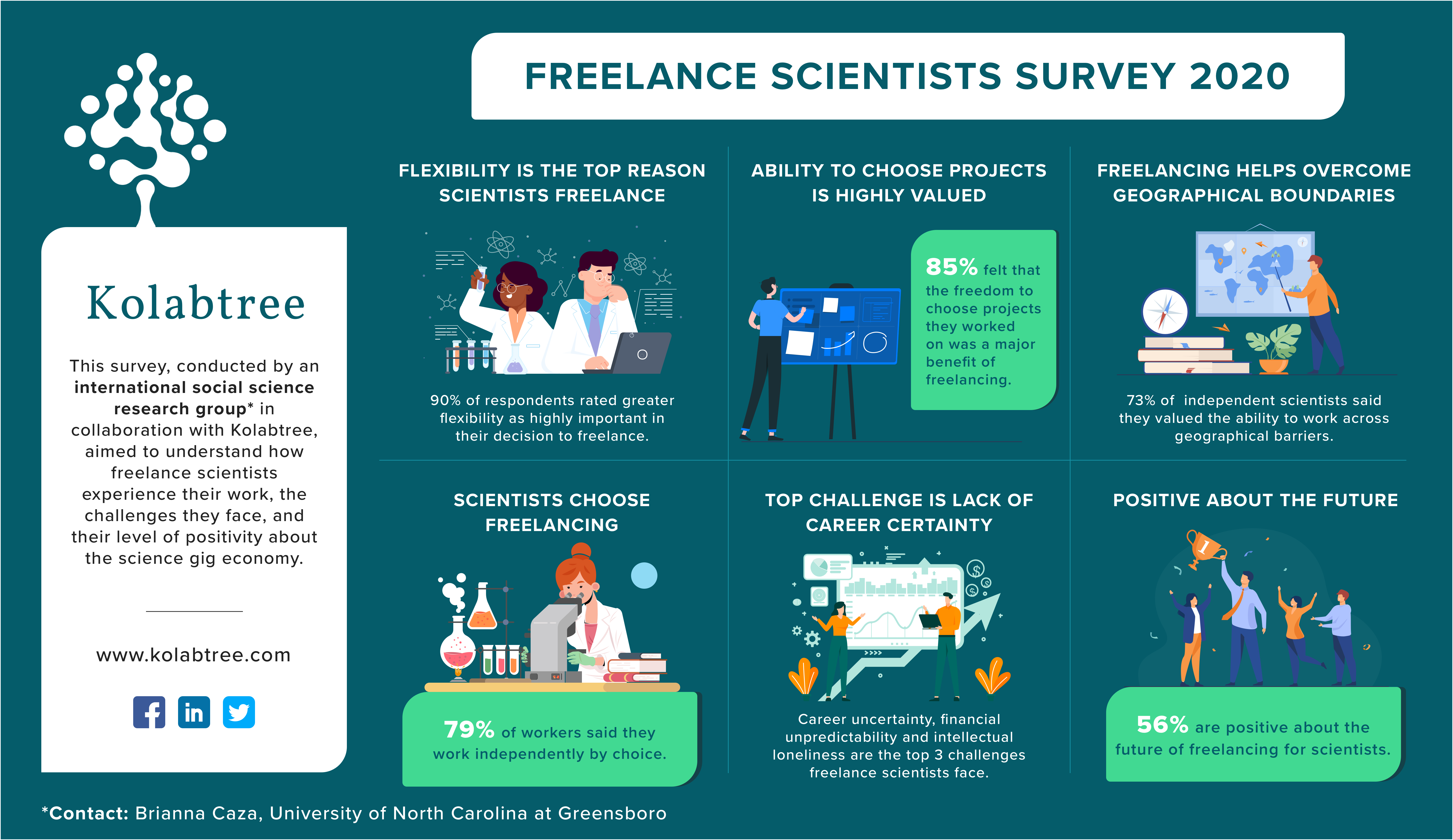 Who took the survey?

Approximately 542 individuals who worked through Kolabtree fully completed an online survey
that asked about their experiences of their work. Of the 542, 478 reported that they were
currently actively engaging in independent scientist work, and completed the entire survey. Respondents had been working independently for an average of 4.52 years.

49% of respondents had earned doctoral degrees

Kolabtree respondents were highly educated, and worked in a variety of industries
including pharmaceuticals, food science, medical science, biology, and psychology. 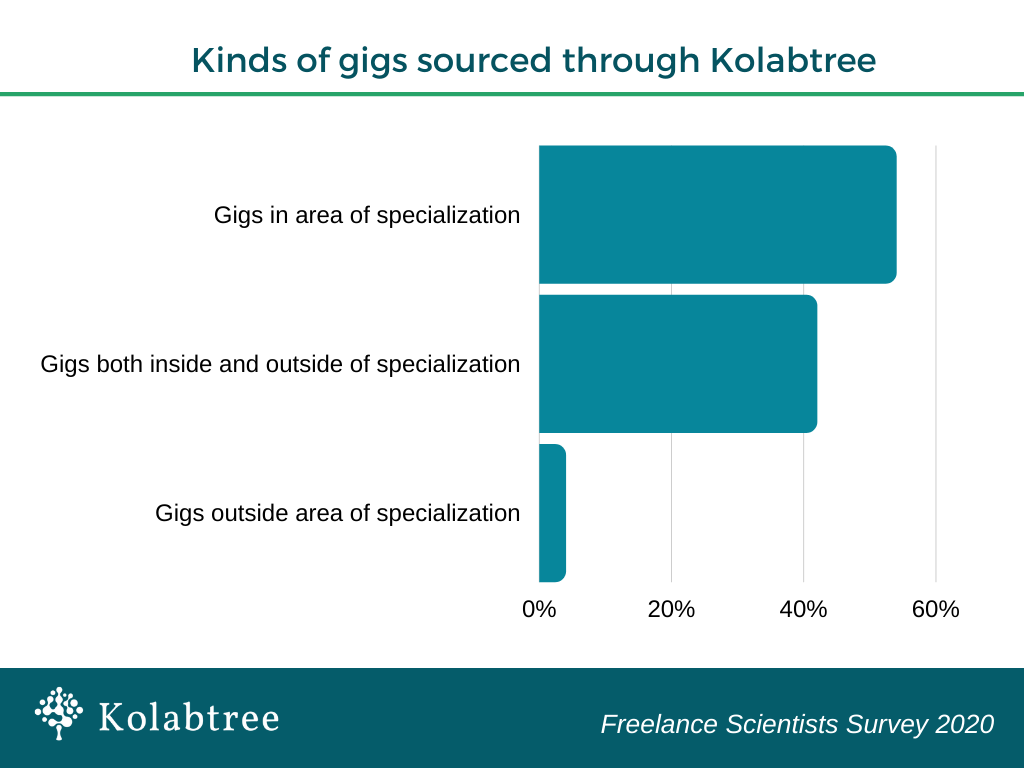 51.4% of respondents sourced the majority of their independent work through Kolabtree 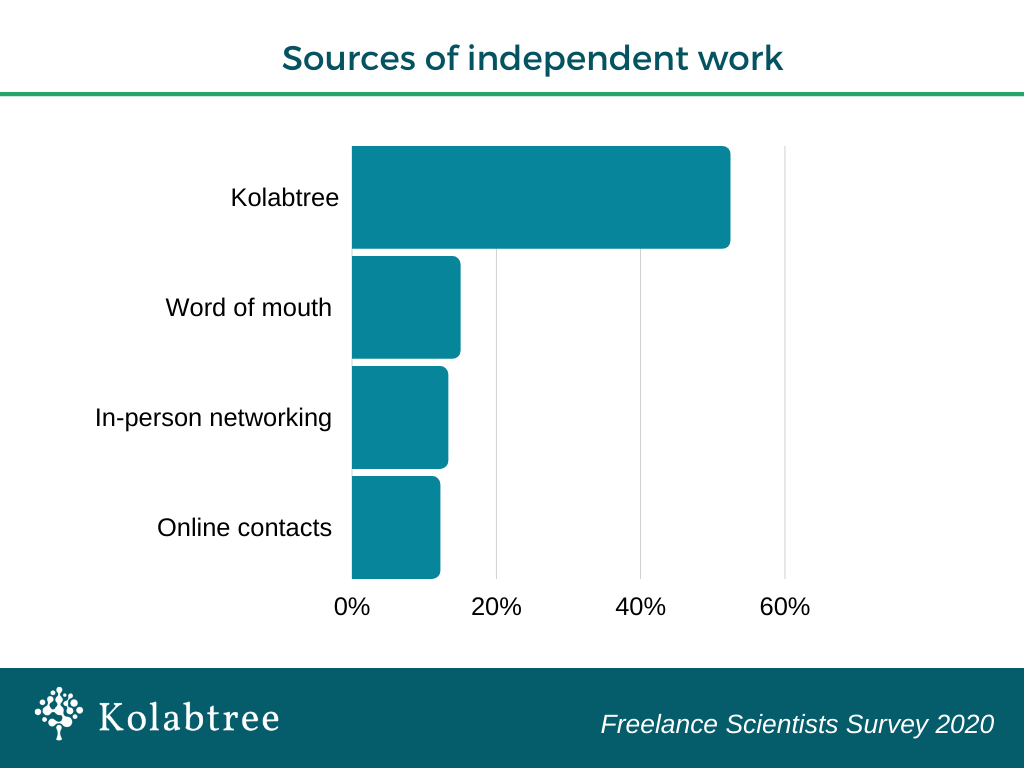 Results at a glance

79% of respondents said working independently was a choice

The majority of independent scientists said that they freelance or consult out of choice. Kolabtree respondents worked in a variety of industries including pharmaceuticals, food science, medical science, biology, and psychology.

The majority of scientists cited freedom to work across geographical boundaries as a prime reason for their reason to freelance. Experts were distributed across the globe, but the majority were from North America and Europe. 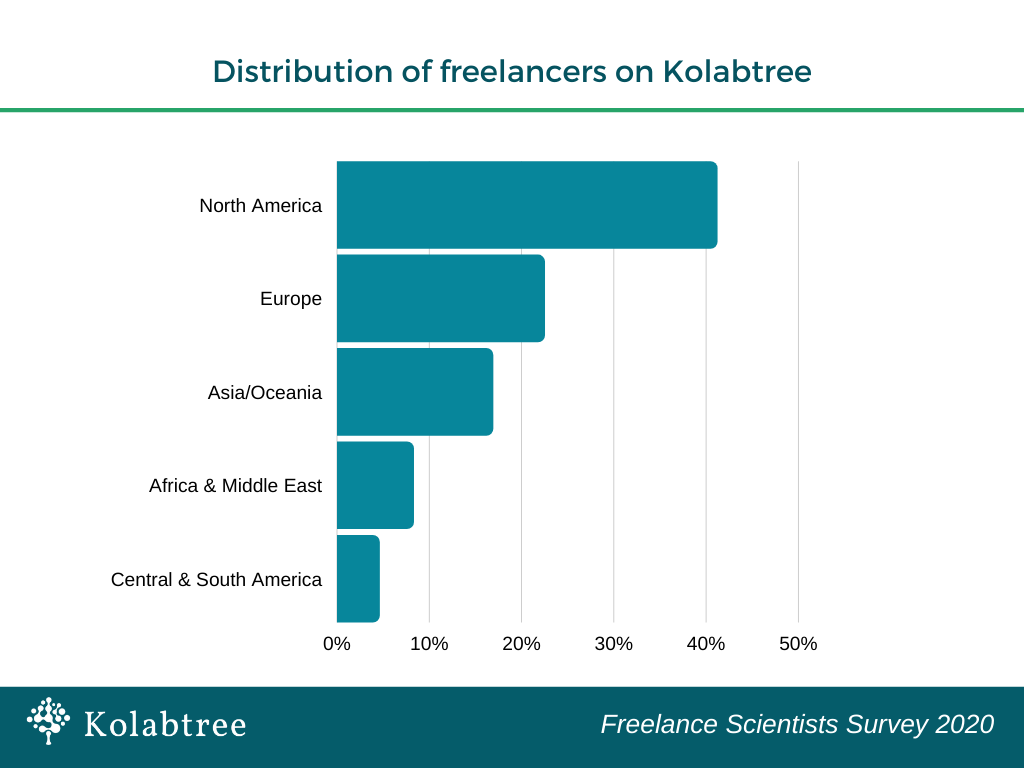 Unsurprisingly, most scientists cited flexibility and freedom to choose their projects when asked about the major benefits of independent work. Issues of discretion and control seemed to be the primary motivating factors.

When asked how optimistic they feel about the future of freelancing for scientists, slightly more
than half indicated that they were with 56% of respondents assessing their optimism as a 4 or 5
on 5-point scale. Approximately 27%  of the gig workers reported that they planned to make the switch from a traditional career to full-time freelance work, while 12.3%  did not, and 21% were unsure if they would make the switch.

The two major challenges faced by the majority of independent scientists were career path uncertainty and financial instability. This was closely followed by intellectual loneliness. The extent to which workers felt this challenges is associated with less work meaningfulness and less thriving.

Individuals who reported higher levels of cognitive flexibility and tolerance for ambiguity perceived these challenges to a lesser extent. This suggests that developing these individual level attributes are likely important for independent workers’ ability to handle the stressors of independent work.

Generally speaking, the majority of the sample seemed to be doing quite well. In fact, the sample
as a whole indicated that they were thriving, demonstrating high levels of both perceived vitality
and learning at work.

Also surprisingly,income did not seem to impact reported level of thriving. In fact, the 167 respondents who
reported earning less than $20,000 a year reported almost the exact same level of thriving (emotional stability, level of energy) as did those making over $150,000 a year.

Overall, we found that the independent scientists in our sample were doing quite well, had
chosen this style of working, were optimistic about the future and felt that they were thriving.
However, our survey also revealed that scientists experience the lack of career security,
financially predictability and intellectual loneliness as challenging. Their experience of these
challenges is shaped by psychological factors, such as their levels of cognitive flexibility and
tolerance for ambiguity.

These findings are from the initial part of a longer research study being conducted by Brianna’s team. The research group is continuing to study the challenges that independent scientists face, and the factors (socioeconomic, job characteristics, individual characteristics) that impact their experience, and their responses to these challenges. The study will also aim to better understand what individual practices help
to mitigate the effects of independent work challenges on worker outcomes.

Subsequent results will explore the impact of the pandemic on remote/independent working for scientists and researchers. Of this research, Brianna says the team’s interest is in “identifying the psychological, behavioral, and social factors that help independent scientists to bounce back from setbacks and thrive amidst the challenges of independent work.”