にいることになります。ホーム"サイエンス＆テック"ニュース＆イベント"What does Brexit mean for the scientific community?

The decision to leave the EU will have a huge, unprecedented impact on the UK’s research and scientific community, which currently comprises a healthy mix of researchers from all around the world. The free movement of scientists within the EU has so far allowed Britain to access and bring home some of the best talent across EU’s member countries. There has been much debate revolving around the referendum results about the future of research and innovation in the UK post-Brexit. While Theresa May has tried to provide some reassurance とのことです。 budget for science and innovation has been increased by £2 billion a year, universities and academia are still skeptical about how the effects of Brexit will play out.

With Article 50 being triggered on 29 March 2017, Brexit is quickly turning into an immediate reality, and pro-EU scientists are even more concerned about what it will mean for science.

The scientific community had made no secret of their stand on Brexit last year. In a letter in The Times, dated 22nd May 2015, some of the scientific community’s stalwarts appealed for a continued relationship with the EU on behalf of Scientists for EU. The signees included Nature’s editor-in-chief, Astronomer Royal Lord Rees of Ludlow and Nobel Laureate Sir Paul Nurse. Scientists for EU now has over 58.9K supporters on Twitter and close to 2 lakh followers on Facebook.

In September, it was feared that 15% of the UK’s university workforce would leave because of Brexit. In a Nature poll, a whopping 83% of researchers living in the EU thought that Brexit was a bad idea. When the vote results were out, scientists across the country were dismayed, as exemplified in this article by Stephen Curry.

Twitter saw an outpouring of emotions from the research community, most expressing shock and disappointment. 自然 carried the responses of students and academics to the referendum results, with industry experts expecting brain drain and PhD scholars terrified about their future.

@NatureNews I am managing EU funded research: Britain will most likely experience brain drain, back to where EU researchers feel supported. 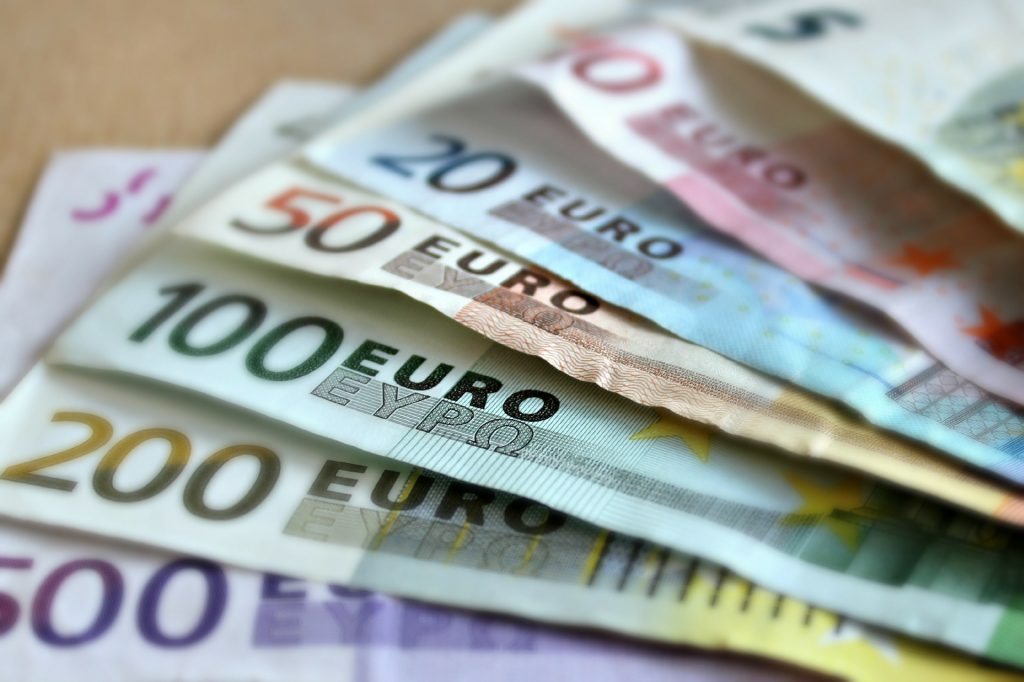 Questions about funding from the EU remain yet to be answered

There is no doubt that the UK has benefitted from European Union resources so far. The University of Birmingham reports that, “since 2007 Britain has won almost 1,400 of more than 5,000 grants from the European Research Council, receiving 22% of allocated funds.”

The Framework Programme 7 (or FP7, as it’s popularly called) was the European Union’s Research and Innovation funding programme for 2007-2013. Under this scheme, the UK received €6.9 billion out of a total of €55.4 billion. The Royal Society also provides this graph below, which shows the distribution of FP7 funding: 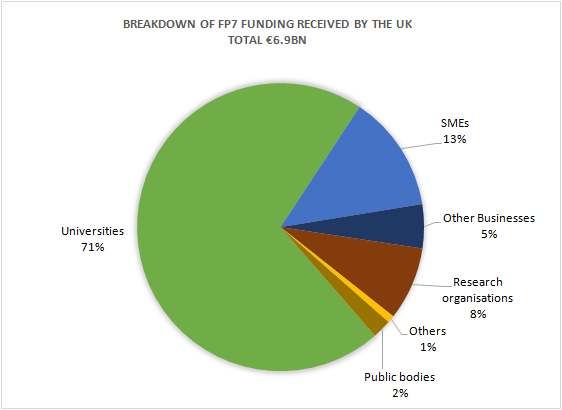 The graph above needs no explanation.

The successor to FP7 is the Horizon 2020 programme, which the European Commission states is “the biggest EU Research and Innovation programme ever with nearly €80 billion of funding available over 7 years (2014 to 2020) – in addition to the private investment that this money will attract. It promises more breakthroughs, discoveries and world-firsts by taking great ideas from the lab to the market. ” The Horizon 2020 programme, however, necessitates that its member countries contribute to it, which is currently uncertain in the case of the UK. Another catch is that it comes the condition of free movement. There is expected to be an impact on the flow of talent to the UK – will UK universities still be able to hire from across the European Union with the same ease? Will the UK benefit the same way in Horizon 2020 as it did from FP7? These are questions that as yet remain unanswered.

The UK has also been positioning itself as a world leader in the life sciences industry. Though 本記事 states that Brexit can still be positive for the life sciences sector, it leaves the reader wondering about the “potentially-damaging effects of Brexit on VC funding, research collaborations, hiring and regulations”, which is a considerable number of things to be worried about.

Another side of the story

Scientists for Britain, a community of scientists who believe that the UK is better off without the EU, also has something to say. In an open letter to the scientific community dated 11 June 2016, Howard Morris of Imperial College London argues that there will now be enough funding within the UK to increase its science budget. He also states that the UK has five of the world’s top 20 universities and will continue to attract talent, even if they leave the EU.

There is also the view that perhaps Britain can look beyond the EU now when it comes to opportunities for research and can focus on attracting talent from the rest of the world as well.

Response to Article 50 being triggered

In response to article 50 being triggered, Professor Venki Ramakrishnan, President of the Royal Society, said this as part of his statement:

“Whilst there will be much to sort out during the negotiations of the UK’s terms of exit, we hope that the Government will make it an immediate priority to ensure that EU researchers who are already working and living in the UK and their dependents have the right to remain here.”

The Director of the Wellcome Trust, as part of his statement, stated that they are working with the UK government to make sure that EU nationals working in the EU feel encouraged to stay. He also emphasized that the UK government retain access to EU funding, if not, explore alternative, international means of funding.

What do you think?

As strong supporters of cross-border collaborations and open access to science, we hope that we can play a part in encouraging the research community to share and collaborate in the post-Brexit era.  Our pool of scientific researchers come from a diverse mix of backgrounds and geographies. We believe that collaboration sets the foundation for better innovation, better solutions and a better world.

We would like to invite your opinions on Brexit in the comments below. You can also つぶやく. We look forward to hearing your thoughts!