Eighty nine years ago, an Indian scientist discovered a phenomenon that would change the way the world understood the scattering of light. For this discovery, he was awarded the Nobel Prize in Physique in 1930, being the first Asian and non-white to have received this laurel.

The phenomenon was the Raman effect and the man behind it was C. V. Raman. The Raman effect demonstrates that scattered photons need not have the same énergie (frequency and wavelength) than the incident photons. Some amount of energy is lost when a photon strikes an atom, and each atom can only hold a specific amount of energy. Studying the energies corresponding to the Raman frequency shifts helps identify the composition and properties of materials. 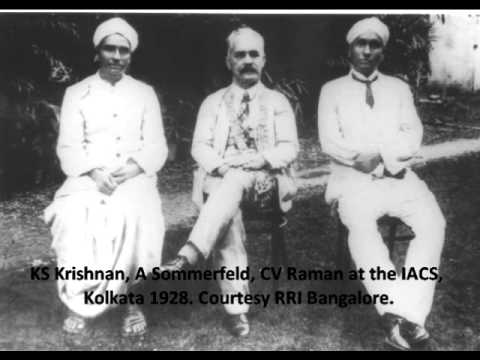 C.V. Raman had one dedicated student and collaborator who helped his recherche realize success.  By his side was K. S. Krishnan, who contributed enormously to Raman’s studies and experiments. Krishnan, who was working in Madras Christian College, moved to Calcutta in 1920 to work with Raman. During the years 1925 to 1928, Krishnan authored singly or jointly 16 documents, under Raman’s tutelage. He was the one who first gave Raman a demonstration of the scattering. Between Feb 19th and 26th, 1928, Krishnan performed many experiments that proved the inelastic scattering of light. The discovery of the Raman effect was made jointly by Raman and Krishnan on February 28th, which is now celebrated as National Science Day.
Après l'attribution du prix Nobel à Raman en 1930, une vive controverse a eu lieu, laissant entendre que Krishnan n'avait pas reçu suffisamment de crédit pour sa contribution. Cependant, Krishnan a déclaré ceci:
“If you read the Nobel lecture, which is a true and honest account of the progress and histoire of the subject, Professor names all his collaborators in order starting with K. R. Ramanathan giving everyone (and including me) his due credit. Again and again in public lectures he always mentioned that I collaborated with him in the discovery of the effect and that our collaboration was similar to that of Bowen and Millikan which was praise indeed”.”
While C. V. Raman made a significant breakthrough, let’s also remember that his discovery was not made by one person alone. It was the produit of a collaboration between two scientists, the result of two people putting their heads, skills and expertise together.
À l'occasion de la Journée nationale de la science, nous vous souhaitons d'autres merveilleuses collaborations, découvertes et innovations !