Two researchers – Alan Porter and Ismael Rafols – mapped six subject areas over a period of three decades in their study titled “Is Science Becoming more Interdisciplinary?” Their findings suggest that science is indeed becoming more interdisciplinary, but in small steps – drawing mainly from neighboring fields and only modestly increasing the connections to distant cognitive areas. 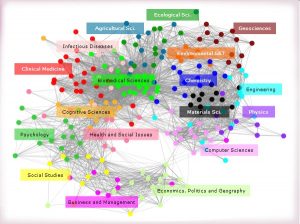 のです。 Global Science Map showcases a much higher degree of overlap across many other subject areas. In addition, several other studies too have validated the fact that science the world over is headed toward becoming increasingly interdisciplinary.

However, the fact remains that the means for scientific collaboration still remain stuck in the last century. This is the primary reason for the lack of a more heavy overlap in the shape of science. As technology and means of communication advance, science can only head toward further collaboration across disciplines.

Platforms such as Kolabtree (www.kolabtree.com) aim to bridge the gap between disciplines and help researchers across the globe interact and collaborate via a modern and intuitive platform. It’s much easier for principal investigators and senior researchers to hire PhD-qualified freelance experts for short-term projects. So, be it a quick literature search or a detailed data analysis, help is always at hand with Kolabtree.